Aphrodisiac Food: Our Selection Of Ingredients 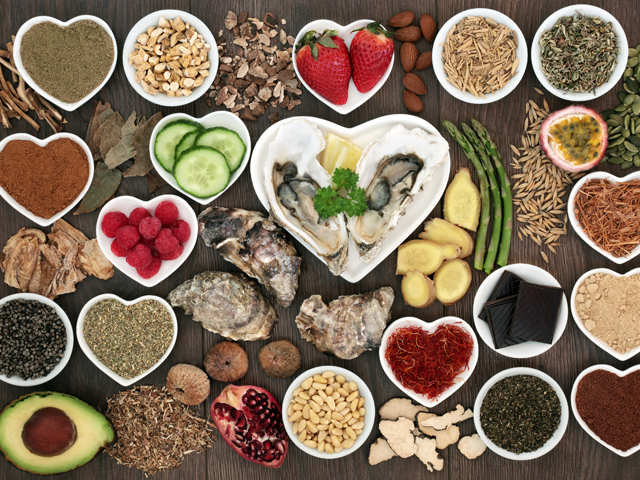 To boost your libido and promote sexual performance, there are many solutions to achieve this. However, we often forget that we only have to look at what we eat to see that we can easily find sexual stimulants on our plates. Here is our selection of aphrodisiac food to increase your sexual desire.

What aphrodisiac food to boost your libido?

Known for millennia to be an aphrodisiac, ginger increases hormone levels (dopamine, serotonin and testosterone), but is also a natural vasodilator. It also facilitates the blood flow which is essential for an erection. What provides these effects is the gingerol held in ginger. To consume this aphrodisiac food, you can infuse it and drink it as an herbal tea or there are ginger juices. If you want to consume it in another way, you can cook it. To learn more about the aphrodisiac effects of ginger, read this article (source, source).

Its stimulating action thanks to its high phytosterol content has given it a reputation for millennia. The Greeks and Romans used it in massage oil or to perfume their baths. It comes from the Crocus Sativus flower. It also acts on depression. However, this spice is rather rare and quite expensive. It is consumed as an infusion or in a mint tea. (source)

This spice is particularly renowned for its vasodilating action which promotes blood flow to the genitals. It promotes blood circulation and has the gift of stimulating the senses. After taking cloves, the erection would be more powerful in men. Like saffron, it can be consumed as an infusion to make an aphrodisiac drink or as massage oil before sexual intercourse. In addition to that, it would have anti-inflammatory properties and would help fight against urinary tract infections. (source)

Known for the tone it brings to the nerves, thyme is also a particularly effective aphrodisiac food to stimulate. It has an effect on the libido and helps to boost it. It is recommended to use thyme as an essential oil. Thyme also helps strengthen the immune system.

The small seeds present in the vanilla pod are said to be euphoric and stimulating. This exotic flavor totally has its place in aphrodisiac foods. It awakens the libido and increases sexual pleasures. A study was conducted by American researchers who confirm that vanilla yogurt has an aphrodisiac aspect.

Similar to ginger, cinnamon raises body temperature and acts directly on blood vessels and hormone secretion. It has a vasodilator effect, that is to say, it dilates the blood vessels and it promotes erection. For its use, promote the application of a massage oil before sexual intercourse. The massage oil can also be placed on the You can also enjoy it in an infusion or by cooking with cinnamon oil to accompany your apples, pears, plums and oranges. (source)

World famous, cocoa and dark chocolate are reputed to trigger the secretion of dopamine and endorphin, two pleasure hormones essential for sexual desire. In cocoa, there is nitric oxide which increases blood flow, which leads to better erection. It is also known that women who eat a lot of dark chocolate have a better sexual appetite, myth or reality? Nothing is scientifically proven. (source, source)

Its composition rich in zinc and l-arginine promotes better erection thanks to its vasodilator action. Honey is also rich in B vitamins which helps in the mass release of testosterone in a man's body. If you wish to consume it, we advise you to use it as a massage oil and spread it on the body before sexual intercourse. You can also use it for your tea infusions or in your food. (source, source)

This aphrodisiac food is known to release a large amount of anethole, a molecule close to estrogen. It is therefore recommended to boost the libido of women. It increases sexual desire by relaxing the muscles and above all it promotes blood flow. This causes a relaxation effect and it improves performance during sexual intercourse. It has positive effects on both women and men. (source)

Otherwise called Crois-de-Malte, this bark promotes the production of testosterone. It is known to remedy against female sexual dysfunction as well as sports and sexual performance. It is particularly recommended for women suffering from menopause to reactivate their libido which is very often at its lowest. Tribulus Terrestris comes from India.

A plant with multiple virtues, ginseng is known to protect blood vessels from oxidative stress but also to improve their elasticity. Thus, vasodilation is all the more effective. It is also very famous, especially in Chinese medicine, to fight against the lack of libido, the problems of sexual desire and frigidity in women. In addition, it also has energizing effects and can contribute to virility in men. (source, source)

Yohimbe is a large tree growing in Central Africa. This very famous bark to fight against erectile dysfunction. It would be very effective in improving libido and promoting strong erections. Indeed, it acts on the blood flow to the genital tissues. It therefore stimulates the genitals, especially the penis of the man during erection. Moreover, it can act on the vaginal impulse and increases sexual arousal in women. Note that this bark is recommended for postmenopausal women with loss of libido. (source, source)

Maca is renowned for its fertilizing and aphrodisiac properties. It would increase sexual desire and libido, often caused by certain antidepressants. It would also have a power to increase sexual performance, sex hormones and above all it stimulates spermatogenesis (the process of producing sperm). This plant only grows in South America and its use is not recommended in France. Experts do not know whether the imported preparations are made from raw or cooked tubers. (source, source)

The vitamin K present in large quantities in asparagus helps to promote muscle strength as well as blood flow to the genitals. Asparagus facilitates erection in men. Vitamin K is activated when intercourse begins and desire increases. As far as women are concerned, folic acid (Vitamin B9) causes the uterus to relax, which makes a big difference during orgasm. (source)

An aphrodisiac food that many people ignore. The avocado would control the sexual functions and further increase the libido. The fact that it is rich in potassium would lead to the growth of testosterone secretion in men. For women, it increases sexual desire. The avocado also contains vitamin E which helps in the production of spermatozoa but also vitamin B6 for the secretion of dopamine. As a reminder, dopamine is a hormone closely linked to pleasure. (source)

Mainly effective in men, celery promotes the production of testosterone and releases a large amount of androsterone. Androsterone is a hormone derived from testosterone. It has a slight musky smell that is produced by the armpits. This smell helps increase libido and arousal in women. (source)

It is an aphrodisiac food known in particular for its effect on blood circulation. Garlic would promote the irrigation of the sexual organs whether in men or women. The blood flow guarantees men to maintain a hard erection throughout the sexual act. Garlic has a booster effect and provides a lot of energy. (source)

Its zinc and selenium composition allows it to be a particularly effective aphrodisiac food for boosting fertility and libido. Like avocado, almonds contain vitamin E which helps in sperm production. In addition, almonds are rich in magnesium which causes relaxation. (source)

Although caviar is rather expensive, this aphrodisiac food is particularly effective in boosting blood circulation and allowing better blood flow to the genitals. As said before, the blood flow to the genitals promotes erection and guarantees a hard penis throughout sexual intercourse. L-arginine is the amino acid that helps erectile dysfunction, it is found, of course, in caviar.