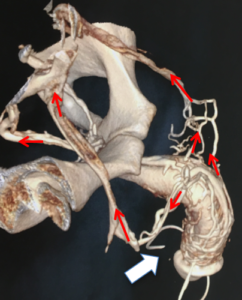 Caverno-venous leakage, also called erectile venous leakage or simply penile venous leakage, is an erectile dysfunction. Men who suffer from it find it difficult to get an erection, despite taking drugs like Viagra. Although this is a rare phenomenon, it is important to know of its existence in order to apply the appropriate solutions.

In this article, we are going to see together what is the caverno-venous leak, the causes, the symptoms and the possible treatments.

Caverno-venous leakage: what is it?

To understand the phenomenon of caverno-venous leakage, it is important to understand how erection works. As you know, it all starts with an excitement, the source of the triggering of a whole series of nervous messages.

During this process, several neurotransmitters intervene so that the message travels from the brain, through the spinal cord, to the erector nerves. These nerves are themselves connected to the muscle fibers of the penis.

But contrary to what many people think, the penis is not a muscle and an erection is not the result of muscle movement. It is an erectile member, having the ability to straighten up thanks to the blood flow.

Indeed, this famous nervous message does not say “straighten up” but “ gorge yourself with blood ”. And for people who suffer from caverno-venous leakage, this is where things go wrong. As you may know, the penis is filled with small blood vessels. They are found in the corpus spongiosum as well as the corpus cavernosum.

When erection occurs normally, these blood vessels dilate and the penis fills with blood. Thus, it swells and straightens. In order to stay hard and straight, a pressure mechanism prevents venous return.

The blood stays in the penis, which stays erect. But when a man has caverno-venous leakage, the blood is not properly brought to the penis.

Or, if it's delivered correctly, it doesn't stay in the blood vessels. Whatever the cause, the fact is that the venous return cannot be blocked and you get a kind of soft erection (source).

Many men occasionally experience erectile failure or dysfunction. This does not necessarily mean that it is a caverno-venous leak. Indeed, it is characterized by three symptoms (source):

If you have these symptoms, do not hesitate to consult your doctor. This will have a cavernosography performed. This is a medical examination that allows you to follow the path of blood through the penile tissues.

In this way, if it is a caverno-venous leak, it can be taken care of. As we will see a little later, there are several solutions to this erectile dysfunction.

What are the causes of penile venous leakage?

Caverno-venous leak is an understudied disorder and doctors don't know what causes it. Moreover, the very mechanism of venous leakage remains rather vague. There are, however, several possible theories, based on patient histories (source).

Caverno-venous leakage, for example, may be an underlying symptom of a chronic disease. Indeed, several subjects with venous leakage also suffer from diabetes, hypertension or fibrosis.

These diseases affect venous drainage, which could be the cause of erectile dysfunction. Moreover, diabetes, in addition to accelerating the degradation of blood vessels, deteriorates the nerve impulses including those which are at the origin of the erection.

However, cavernovenous leakage has also been observed in healthy people. Moreover, some sources indicate that adolescents are particularly affected by this disorder.

In this case, the theory of a psychological cause is preferred. It could indeed be that stress, an unhealthy lifestyle or trauma is the cause of a change in the structure of the penile tissues.

That is to say that for a more or less obvious reason, the blood vessels of the spongy and cavernous bodies no longer allow the accumulation of blood which allows the penis to harden.

Finally, some doctors put forward a neurological explanation. That is to say more particularly a dysfunction at the hormonal level. In this sense, it would seem that several hormones are singled out.

One of them is adrenaline. This comes into play during the contraction of the muscles, a deficit in its production could therefore be the cause of a weak dilation of the penile tissues. However, some studies show that it is rather serotonin that is the cause of cavernous-venous leakage.

This hormone is actually responsible for transmitting the message of vessel dilation. Finally, some doctors have also observed a lack of testosterone in patients who suffer from this disorder. It is then necessary to know your testosterone level to properly identify the cause.

Although the causes of caverno-venous leakage remain uncertain, there are several solutions.

In this sense, the first thing that the doctor will suggest to the patient is to review his lifestyle. Whether it is a chronic illness, a hormonal deficit or a psychological disorder that is the cause, adopting a healthy lifestyle could help improve the overall symptoms.