Ejaculation Problem: Causes And Solutions Of Difficulty Or Inability To Ejaculate 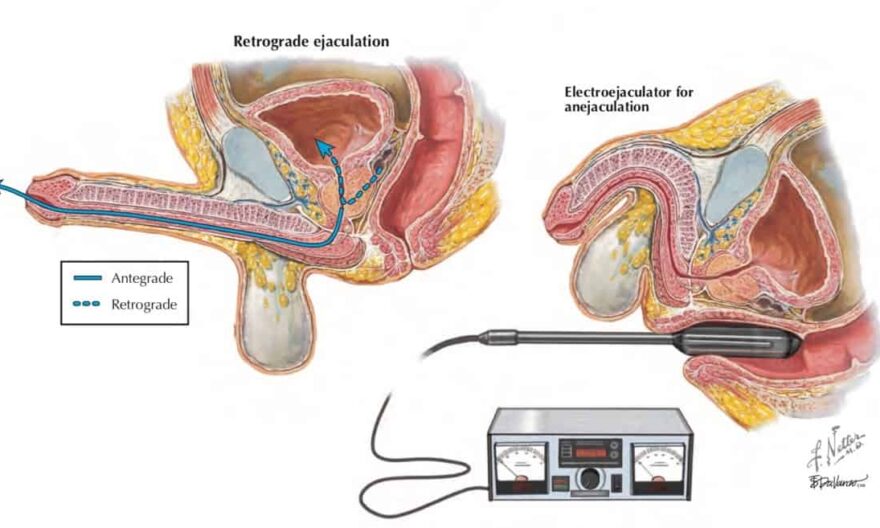 What is an ejaculation problem?

In general, it is possible to define a normal ejaculation as (source):

– An expulsion of 1.5 to 4.5 ml of semen from the penis. – An orgasm concomitant to the process of expulsion of sperm. – A delay of an average of 5 minutes between the start of sexual intercourse and ejaculation.

Thus, it can be defined as ejaculation disorder, ejaculatory phenomenon or at least one of these 3 characteristics is found to be out of the norm. Of course, it is important to consult a health professional in the slightest doubt.

Indeed, he will be able to diagnose you or not an ejaculation disorder but also define with certainty the nature of your problem and offer you an adequate treatment.

– Primary: the disorder is present in every relationship, with different partners and throughout life. – Secondary: also called acquired premature ejaculation, this appears spontaneously during an individual's sexual life. It can be punctual or chronic and is often associated with an underlying disease such as prostatitis, a neurological or psychological disorder.

The causes of this ejaculation problem can be (source):

– Biological: hypersensitivity of the glans, hyperexcitability of the ejaculation reflex, etc. – Pathological: neurological disorder such as multiple sclerosis, prostatitis, hyperthyroidism, etc. – Psychological: depression, anxiety, hormonal disorder (such as a lack of serotonin), etc.

Anejaculation: the complete absence of ejaculation

The reasons for these disorders can be varied and are among others (source):

In some cases, sperm is present during the expulsion phase but in a smaller quantity (less than 1.5 ml) this can then lead to drooling ejaculation.

Anorgasmia: an ejaculation without an orgasm

Anorgasmia is an anomaly that can be associated with an ejaculation disorder. Indeed, in this case, the sperm is expelled following sexual intercourse but the orgasm is absent. This disorder is above all psychological and reported in the DSM 3 (Diagnostic and Statistical Manual of Mental Disorders) (source).

In the case of delayed ejaculation is characterized by difficulty in achieving ejaculation despite:

An erection without anomaly A completely normal sexual arousal phase.

There are two types of delayed ejaculation which are:

– Primary: exists since the beginning of sexual life. – Secondary: occurs punctually or chronically during sexual life.

Thus, the causes of this ejaculation problem are varied and of several different natures. Among others you will find (source):

Pelvic-perineal pain may occur after triggering ejaculation or orgasm in men. Its prevalence remains around 1 to 4% of the general population and the pain generally lasts less than 5 minutes.

Nevertheless, this type of ejaculation problem remains too unstudied and there is still no scientific consensus to define, diagnose and treat painful ejaculation (source).

How is an ejaculation disorder diagnosed?

If you notice an abnormality during your ejaculation such as a low quantity of sperm, an absence of this liquid, a problem with orgasm or even premature or delayed ejaculation, it is advisable to consult your doctor..

If your doctor judges that his knowledge is not sufficient to help you, he can refer you to a specialist such as a urologist for physiological causes or a psychologist or a sexologist for causes of psychological origin.

Among the potential diagnostic tests, you could undergo:

– A summary of your clinical history: this step is essential to define the physiological cause or not of your ejaculation disorder. During this phase, particular attention will be paid to the primary or secondary nature of the problem, but also to the existence of risk factors or genetic predisposition to this type of disorder. – A complete clinical examination: this step includes a classic perineal examination but may also include a digital rectal examination and a neurological examination to determine the physiological origin of the illness. – A biological assessment: this examination includes the evaluation of the fasting glycemic level, a spermogram to check the integrity of the spermatozoa, a search for spermatozoa in the urine and a dosage of total and bioavailable testosterone at the start of the day. This last test will be repeated several days apart to check your body's hormonal balance. – A morphological assessment: this step may include an ultrasound or, in rarer cases, a pelvic MRI. – A psychological evaluation: in order to rule out or not the relationship with a psychological disorder. In general, this examination is carried out when the physiological causes are excluded from the diagnosis.

Potential Treatments and Solutions for an Ejaculation Disorder

It is difficult to list all possible treatments for each type of ejaculation disorder. Indeed, there are almost as many possible solutions as there are causes.

In general, if the cause of a problem with ejaculation is due to drug treatment, the doctor will seek, where possible, to modify your treatment. If your problem is of psychological origin, therapy with a sex therapist is often the most recommended.

Finally, if the ejaculation disorder is of physiological origin, the treatments vary enormously depending on the exact cause and the type of ejaculation problem. Thus, drug treatment or surgery may be prescribed.

To conclude, ejaculation problems are many and varied. It can be interesting to know how to differentiate each disorder in order to be able to help your general practitioner during his diagnosis.

Nevertheless, if you notice a recurring ejaculation disorder (happening during several sexual intercourses in a row), it is strongly recommended to consult a health professional. Indeed, the latter will be able to offer you a diagnosis and an appropriate solution.