Fordyce Spot: What It Is And How To Treat It? 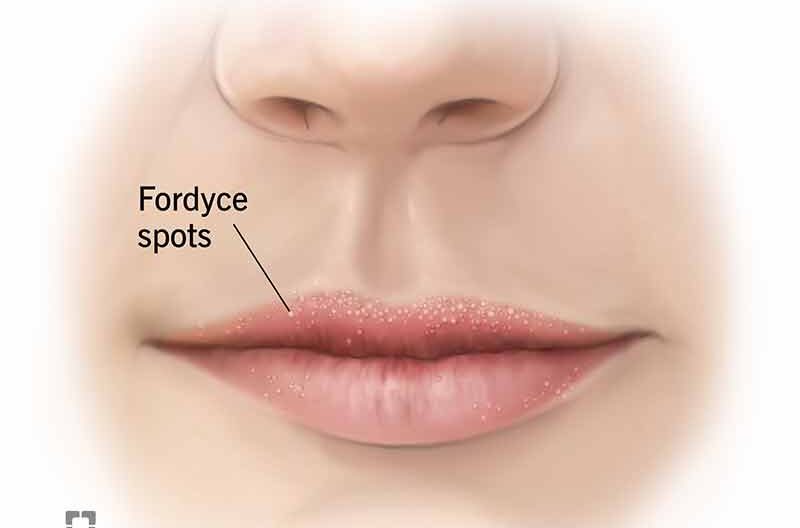 Fordyce spot is a small white pimple similar to an acne pimple that can appear on the body, mainly on the cheeks or on the male or female genitals. What causes Fordyce spots? Is that bad? How to get rid of it? We answer all these questions.

1 Fordyce spot: what is it?
2 How do Fordyce spots appear?
3 What are the possible complications and developments?
4 How to diagnose them?
5 When to consult a specialist or a dermatologist?
6 How to get rid of Fordyce spots?
7 Do Fordyce spots disappear?

Fordyce spot: what is it?

Fordyce spots correspond to small whitish spots on the surface of the skin that appear on the face or more frequently on the genitals: on the labia minora of women, or on the penis in men (source).

In men, Fordyce spots can appear as pimples on the penis. They owe their white color to their production of sebum which is used to moisturize the skin. It is possible to make them visible in transparency, the skin of the penis at this location being particularly thin. In general, they are only really visible when your skin is stretched, and therefore during erection.

Do not confuse Fordyce spots with genital warts such as condyloma, an STI which most often results from a papillomavirus and which will have more serious implications.

Fordyce spots are therefore benign growths, in the form of small white pimples on the penis that can appear in some men. In reality, we would all have them, but to a greater or lesser extent, and above all more or less visible.

Fordyce spots are by no means contagious. So you do not risk transmitting them to your partner (source).

Specialists, because of their benign nature, most often advise not to intervene. But you might find it unsightly and want to remove them (beware of the risk of inflammation in this case). Fortunately, solutions exist to get rid of these small white pimples on the foreskin (source).

How do Fordyce spots appear?

Fordyce spots usually appear at the end of puberty. Their formation depends largely on your sex hormones. However, we lack more precise information to determine the real cause of these small pimples.

According to the most recent studies, the main cause is a hormonal disorder (source). Indeed, it would seem that their origin comes from the increase in the size and the number of the lubricating glands. Among other things, this prevents the skin from drying out. Thus, during puberty, your body will experience a sudden change in its hormone secretion (source). This will prompt the formation of Fordyce spots like a pimple on the penis.

Men with oily skin are particularly at risk. They then risk seeing these small white pimples form on the face or on the penis. Indeed, too much sebum secretion would lead to the development of this skin malformation.

Note that Fordyce spots are not linked to a lack of hygiene and are in no way sexually transmitted.

What are the possible complications and evolutions?

Even if the Fordyce spot is completely benign, it is a very common reason for consultation. Especially among young people in full puberty who are worried and complexed by these small pimples.

It is also possible that the partner is put off by this malformation or fears the contagion of an STI. However, be aware that these small white pimples on the penis do not cause any known complications. Also, Fordyce spots are unlikely to disappear (source).

However, if these small white pimples on the pubis are harmless, it can cause stress and anxiety in the patient. Thus, this emotional instability may result in a psychosomatic reaction and the appearance of erectile dysfunction or even a drop in libido. Thus, it is important to accept this imperfection otherwise your sexuality and your sexual relations will be affected.

How to diagnose them?

To diagnose these sebaceous glands in the penis, you will need to look at your penis. Generally these small white pimples on the glans are all the more visible when the penis is erect.

If you notice these pimples on the penis, we encourage you to consult a health professional such as a doctor, dermatologist or sex therapist. Indeed, even if these sebaceous glands of the penis are benign, the doctor can confirm or refute your diagnosis and reassure you.

When to consult a specialist or a dermatologist?

Professionals also advise to consult immediately when you see small pimples appear. And especially if they form very quickly.

This will allow you to exclude with certainty the probability that you suffer from a condyloma. And therefore that you contaminate your partner (who can contract it in the cervix) (source).

As Fordyce spots do not trigger any pathology, a consultation with a sexologist or a dermatologist will calm things down. Indeed, he will reassure you by explaining to you in particular that the beaded crown is in no way dangerous and that it does not cause pain or contagion (source).

How to get rid of Fordyce spots?

According to many specialists, there is no real treatment to make a Fordyce spot disappear. If you have these small white pimples on the glans, it is possible in some cases that this discomfort follows you throughout your life.

And because it's benign, it wouldn't require any treatment. Some sexologists even consider that treating this skin condition can be seen as relentless and cause more harm than good. We should accept them as our skin texture, or freckles.

But we can understand that the formation of small white pimples on the penis is a source of questioning on the part of your partner. And therefore complexes in your sex life. Scientific opinions differ on the effectiveness of cure treatments for Fordyce spots. Nevertheless, we would like to come back with you on the potential treatments.

Indeed, this will allow you to regain your self-confidence, and avoid libido disorders. Here are the remedies currently on offer, however we advise you to take the possible side effects into account in your choice.

Laser treatment is the first option available to you to get rid of your Fordyce spot. Your dermatologist can indeed advise you on this solution if you wish to remove them for aesthetic reasons or because this malformation is complex for you.

This is the most common method, and in particular with a gas laser (like carbon dioxide), or a molecular laser. It is up to your specialist to tell you which one will suit you best (in terms of the development of your pearl crown, and your financial means).

The gas laser is the oldest and most widely used option. It is also used for other skin problems. Beware, however, of the risk of scarring. This is also the reason why we limit its use to parts of the body that are less visible.

The molecular laser is more effective, less risky, but much more expensive (source).

Local anesthesia is required and side effects are possible such as redness and a tingling or burning sensation. It is recommended to apply an ointment of the Vaseline type during the two days following the intervention.

Hyfrecation is a method of using a device in the form of a pen to pierce the skin and remove the tissue. It is for example commonly used for hair transplantation. But would also treat Fordyce spot. In particular at the level of the penis (source).

The whole point of this solution is that it presents much less risk of scarring. And would also limit the reappearance of pimples (which is often the case with laser treatment, for example).

The procedure is quite simple and is done in several steps.

– The application of a local anesthetic to prevent you from suffering during the procedure; – The doctor will remove the tissue, as for a laser treatment. He will also take advantage of this step to make sure, using a microscope, that it is not a more serious condition (such as an STI or cancer).

Very fast, this intervention would get rid of dozens of pimples in just a few minutes. It is therefore an option that can be interesting if you have a lot of grains (up to a hundred) on your penis.

However, this procedure requires local anesthesia.

Since Fordyce spots can be triggered by a hormonal imbalance around puberty, some general acne treatment creams may be helpful (source).

To find out if this type of treatment can be effective in your case, just talk about it with your doctor or more directly with a dermatologist. The latter can advise you in particular on a cream based on glucocorticoids or retinoids.

There are also pimecrolimus, benzoyl peroxide or clindamycin solutions. This last option is particularly effective in limiting inflammation. Although it is rare for Fordyce spots to swell.

In some cases, you will be recommended these types of solutions after undergoing gas laser treatment. In particular creams containing exfoliating acids such as trichloroacetics or bichloroacetics.

Photodynamic therapy is another possible solution to get rid of your Fordyce spot. Activated by light, it works with a drug: aminolevulinic acid (or ALA) which will be applied to the skin before being activated by a light source (blue or a molecular laser).

Photodynamic therapy notably makes it possible to prevent certain skin conditions (such as acne or cancer) (source). However, it is very expensive. Additionally, you may become more sensitive to UV rays.

Also watch out for side effects such as redness or itching.

To finish this exhaustive tour of solutions if you suffer from Fordyce spots, know that you can also test a treatment based on isotretinoin (source). The main disadvantage of this solution is that it requires a lot of patience (it takes several months to act). But will have longer lasting results.

Beware of contraindications and risks of side effects. Including congenital problems, particularly serious for women, less so for men). In some cases, you will still have to abstain from having sex for the duration of the treatment (several months, remember).

The last and most recommended solution is to accept these small white pimples on the glans. Indeed, some researchers agree that Fordyce spots are irremediable. Thus, to avoid developing anxiety or depression, the best solution is still to accept them.