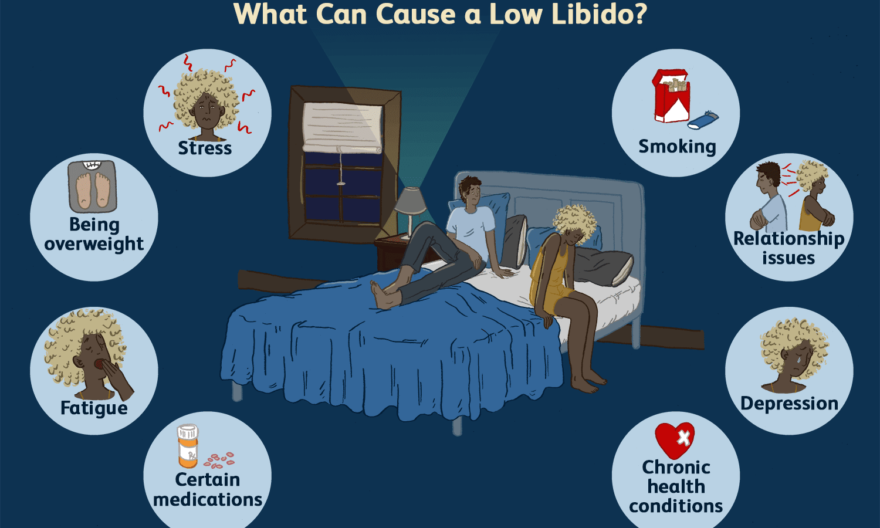 A decrease in libido can develop both because of health problems, as well as psychological or emotional problems. Inhibited sexual desire is a type of sexual dysfunction that affects both men and women. Decreased sexual desire has been associated with low levels of testosterone in men. Likewise, women in the transitions of menopause sometimes report a decrease in libido. Chronic illnesses and chronic pain can also lead to decreased libido, likely through a combination of the physical effects of illness as well as the psychological stress associated with chronic illness. Medications, such as some antidepressants, can also cause low sex drive. Low libido can be one of the most difficult symptoms of menopause to deal with, often because a woman could not understand how and why she lost the desire to be physically intimate with her partner. It is important to recognize that loss of libido during menopause is common, affecting up to 20-40% of women. Loss of libido is a complex phenomenon with psychological, relational, physical and hormonal dimensions, as unique as the women who suffer from it.

The term libido has long been used to describe a person's desire for sex. It is medically referred to as "hypoactive sexual desire disorder", primarily characterized by a lack of interest in or desire for sexual activity. Sexual feelings and desires are less frequent, and the energy for sex wanes or drastically disappears. Although loss of libido differs from the inability to arouse or achieve orgasm, postmenopausal women can also experience these symptoms of sexual dysfunction. Other symptoms of menopause, such as vaginal dryness and irritation, can also be linked to symptoms of a loss of libido. Men don't like to talk about it, but loss of male libido or inhibited sexual desire can ruin a marriage more than any other sexual dysfunction. Loss of interest in sex may not be as common an event for men as it is for women. It affects around 15% to 16% of men, and this figure is at least double that in many women. Loss of libido also makes some men more unhappy for the rest of their lives compared to women. Only 23% of men with a loss of libido say they still feel very happy with life in general, compared to 46% of women. But loss of libido is not something you have to live with. You can resort to various processes to regain your libido and be happy.

How do you know if you have a problem with loss of libido?

Low libido usually doesn't happen suddenly. It's not like a cold that you catch like that, when you wake up. It can be a gradual process. Although it is difficult to give a precise definition, low libido is summed up by a lack of interest in sex. The frequency of sexual activity is not the best measure of sexual interest, even if the desire is there. If you're in a committed relationship, and you're having sex that falls short of the norm, like once a week, you may wonder if you're okay. If your loss of libido is causing you problems, researchers will agree that it's best to tackle these issues before they take root. To help identify the warning signs, answer true or false to the following points. With majority answers true, you are losing sexual desire. Understanding the different causes will be the first step in finding the appropriate solution.