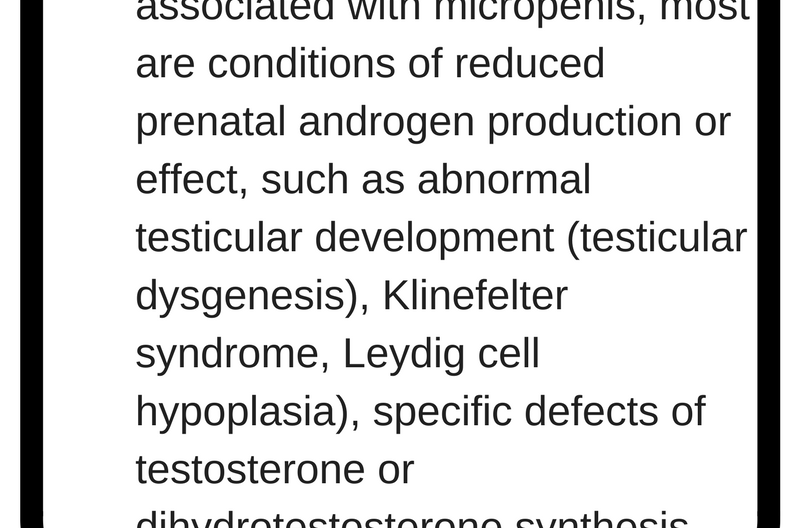 Penis size is one of the oldest concerns of men. Faced with the incessant demand for a penis whose size exceeds normal, even excessively large, there is no more fear among men than having a micropenis. A very small penis is one yard below the normal size.

Structure of a micropenis

As we have seen, a very small penis is generally detected in early childhood, but an adult can also have a micropenis. A small penis has developed normally in structure and appearance, but is reduced in size compared to normal. It results in a length of less than 2cm in newborns, and less than 8cm at rest in adult humans. It is also necessary to know the difference with the other anomalies of the male sex. There is in particular hypogonadism, an anomaly close to the micropenis, but different from the latter. Hypogonadism is due to a deficiency in the level of sex hormone due to the reduction in the secretion of gonadotropins. This disease can cause delayed puberty in adolescents. Hypogonadism is similar to a micropenis, because the first can cause this anomaly of the penis of small size.

When to Diagnose a Micropenis

The micropenis is not detectable due to a simple narrowing of the penis. A micropenis can be diagnosed at birth, but also at a later age. In newborns, the normal size of the penis is 2 to 4 cm after stretching. If the size of the child's penis is less than 2 cm, we are in the presence of what is called a micropenis or microphalus. It is important to act quickly, because at this age it is easier to remedy. And since the child is still very small, it is very difficult to detect the anomaly. At the teenage stage, penis size should increase by 2cm or even double. It is generally at puberty that the anomaly is detected. On the adult side, on the other hand, many people think they have micropenis. We talk about dysmorphophobia because you have to know that these men often have this complex when they notice that their penis is smaller than that of others. To tell the difference, it will be necessary to measure and compare with a penis of normal size. The male sex in adulthood measures on average between 11 and 14 cm. We would be in the presence of a very small penis when it measures less than 8 cm at rest for men aged 20 to 40.

As a rough guide, the Johns Hopkins University Harriet Lane textbook defines the micropenis as follows:

Variations in average penis size from age 7 are due to developmental differences as boys approach puberty. At puberty, it becomes much more difficult to define the micropenis by centimeters alone; other calculations are necessary until puberty.

The causes of micropenis

After the diagnosis of this abnormality of the penis, make a hormonal assessment to determine the cause of the micropenis. The causes that can cause a micropenis are numerous and always so difficult to identify. There are four in particular, which are: insufficient secretion of the male hormone or androgen, indifference of the tissues to androgens, a malformation with or without chromosomal abnormality, and finally the environmental cause during pregnancy. But usually, a micropenis is due to a hormonal problem. We also note that it is more and more frequent that we do not know the real reason which would have caused the malformation of the penis.

Treatments for a micropenis

Having a micropenis is the most unpleasant thing for a man. Consultation with a sexologist or doctor will help determine the ideal procedure for the patient. Whether it was detected from birth or only in adulthood, there are a number of remedies for having a penis of normal size. The patient has the choice between hormonal treatment and surgery. Hormone treatment consists of stimulating the production of hormone by the testicle or directly injecting testosterone. To benefit from this intervention, it is necessary to detect the micro penis at birth until adolescence, that is to say at 12 years of age. For those older, resorting to surgery is possible to increase the size of the penis. The person has the choice between the section of the suspensory ligament of the penis or the injection of autologous fat. This second option is not without risk, but allows the patient to get 2-4 cm more.