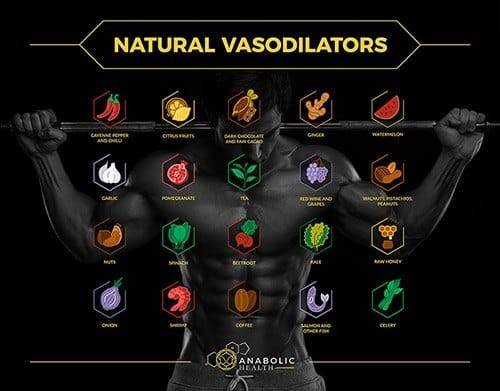 A natural vasodilator is a substance found in nature and which has properties allowing to dilate the blood vessels of the penis. As a result, these foods help to fight against an erection problem. But then, how does it work?

What are the impacts on the body, health and sexuality? We explain the operation and benefits of natural vasodilators and give you the list of 20 foods that increase blood flow to the penis.

What is a natural vasodilator?

As a reminder, following hormonal or mechanical stimulation, the erectile tissues of the cavernous bodies will relax. This allows the blood vessels present to widen via dilation. This mechanism is called vasodilation.

This phenomenon results in an increase in blood flow within the tissues of the penis as well as a reduction in blood pressure. This is how the penis will be able to harden and thus become erect (source).

The molecular actors of vasodilation

The molecular mechanism by which vasodilation occurs is quite complex and many factors come into play (source). Nevertheless, we can identify two signaling pathways that come into action during vasodilation of the penis and therefore erection via the increase in blood flow.

1. Nitric oxide : The signaling pathway leading to the synthesis of nitric oxide has been studied many times by researchers. Indeed, this molecule has the ability to promote the elasticity of blood vessels, particularly those of the cavernous bodies of the penis, and also plays a role in their vasodilation (source). In this signaling pathway, we can note the role of L-arginine. Indeed, this amino acid is sufficient to promote the synthesis of nitric oxide and thereby promote the vasodilation of penile blood vessels (source). 2. Inhibitors of the enzyme phosphodiesterase 5 (PDE 5) : PDE 5 is an enzyme that appears to prevent the body's blood vessels from dilating. Thus, there are chemical and natural inhibitors that prevent the action of this enzyme and thereby cause vasodilation of blood vessels (source). This has the consequence of activating the erectile process and thus increasing the blood flow within the penis causing its hardening and therefore its erection. The vast majority of drugs to fight impotence have a PDE 5 inhibitor. This is the case with Viagras, Cialis or Vitaros.

Side effects and contraindications of natural vasodilators

Nevertheless, even if these elements are natural, certain contraindications exist. Indeed, given that natural vasodilators act on the blood system, in certain cardiac pathologies and hypertension these foods can aggravate the dysfunctions present or cause side effects to appear.

Also, it is best to consult a health professional before taking these foods if you are subject to a blood circulation disorder or are taking specific treatment such as anticoagulants.

What are vasodilator foods?

Now that you have a better understanding of how a natural vasodilator acts, we invite you to see with us the list of 20 natural vasodilators thus making it possible to promote the onset of erection thanks to an increase in blood flow in the penis.

Wine is a well-known vasodilator. Indeed, the polyphenols it contains have effects allowing the dilation of blood vessels. These molecules are also antioxidants to fight against oxidative stress.

Thus, wine could also have benefits on the protection of blood tissues (source). Namely, a clinical study has shown a negative correlation between wine consumption and heart risks (source).

Like many peppers, cayenne helps to dilate blood vessels and fight against vasoconstriction. The main reason for this is the active component of cayenne pepper: capsaicin (source). Indeed, this chemical compound from the alkaloid family can affect blood flow by causing vasodilation of blood vessels.

According to a study on rats, capsaicin could reduce the level of substance P in the body, which could explain this vasodilation (source). Be that as it may, studies on this subject are mainly carried out on animals and there is still a lot of research to be done to know the real impact of capsaicin on humans.

Grape seeds are also natural vasodilators. In addition to being very low in calories, they would prevent your testosterone from turning into estrogen via aromatase (source). In addition to this, grape seeds could act on vasodilation by increasing the level of nitric oxide in the blood (source).

Therefore, these pips could also act on the influx of blood from the penis and promote erectile function.

Finally, dark chocolate would also be a natural antioxidant useful for fighting against oxidative stress and thus protecting blood tissue thanks to its compound epicatechin, an antioxidant flavonol (source).

We prefer dark chocolate to avoid sugar intake. In addition, it is advisable to consume it occasionally.

Lemon, like all foods rich in vitamin C, would promote the secretion of nitric oxide in the body. Also, lemon is rich in flavonoids, antioxidants that help fight against free radicals and thus preserve cell and tissue integrity, particularly in the blood vessels.

This content can decrease inflammation, which can reduce blood pressure as well as arterial stiffness while improving blood circulation and nitric oxide production (source).

Regular consumption of citrus fruits, such as lemon and grapefruit, has been linked to lower blood pressure and a lower risk of stroke (source).

Pomegranate is rich in polyphenols, antioxidants and nitrates, which are elements that can promote the vasodilation of blood vessels. Consuming pomegranate (regardless of its form) would improve oxygenation of muscle tissue and blood circulation, and therefore increase blood flow to the penis.

According to a study, ingesting 1000 mg of pomegranate before physical training would increase the diameter of vessels, blood flow and performance during exercise (source).

Walnuts are rich in L-arginine, vitamin E and alpha-lipoic acid, which are said to stimulate the production of nitric oxide. Consuming nuts would improve the functioning of blood vessels, reduce blood pressure and reduce inflammation. This would also be beneficial for people with diabetes.

In a study conducted on 24 people with diabetes, those who consumed 56 grams of nuts per day for 8 weeks noticed a marked improvement in their blood circulation compared to the control group (source).

Watermelon is another natural vasodilator. It is rich in L-citrulline, an amino acid that acts as a precursor to nitric oxide. Indeed, according to several studies, L-citrulline would lead to an increase in the level of arginine in the body, which itself will lead to a greater secretion of nitric oxide (source).

This will therefore improve the elasticity of blood vessels, promote their vasodilation and improve blood flow. In addition, watermelon is known to be an aphrodisiac for getting hard. Thus, its dual property could help maintain the integrity of erectile functions.

Salmon, like many fatty fish, is rich in omega 3 and coenzyme Q10. These nutrients are part of the nitric oxide signaling pathway. As a result, salmon is a natural vasodilator which contributes to the elasticity of blood vessels and improves blood flow in the body, particularly in the penis (source).

The onion is a food with benefits on well-being and health but also on sexual functions. Indeed, this natural vasodilator is rich in quercetin, a molecule that can contribute to the nitric oxide signaling pathway, in particular by preventing its elimination (source).

Thus, the onion could dilate the blood vessels present in the cavernous bodies of the penis and increase the blood flow in it. This would contribute to the maintenance of erectile functions (source). Its benefits, however, largely depend on the pH of your blood and its oxygen concentration. Without it, it might prove ineffective.

Several clinical trials have revealed that beets are effective in dilating blood vessels and reducing blood pressure. It also has anti-inflammatory properties. Indeed, beets are rich in nitrate (source) that the body can transform into nitric oxide (source).

According to a study, people who drank 140 ml of beetroot juice saw a drop in their blood pressure, inflammation of their blood vessels and their clotting time compared to those who took a placebo (source).

Garlic is also high in nitrate. Thus, just like beets, garlic consumption would help maintain the body's nitric oxide level and could have effects on the vasodilation of blood vessels, reduce blood pressure and improve blood flow (source).

According to some studies, garlic – and more specifically its sulfur compounds like allicin – can increase blood flow to tissues and thereby lower blood pressure by relaxing blood vessels.

In fact, in a study of 42 people with coronary heart disease, those who consumed garlic powder tablets containing 1,200 mg of allicin twice a day for three months saw an improvement in their blood flow in the body. upper arm artery compared to a control group (source).

Rich in vitamin C, parsley is another natural vasodilator that would improve blood flow in the penis (source).

In addition to being known as a natural aphrodisiac, ginger is said to be effective in improving blood circulation and lowering blood pressure via the phenomenon of vasodilation. You can consume it fresh, dried or powdered.

The aphrodisiac ginger also has anti-inflammatory properties and has many other health benefits. Indeed, ginger could contribute to the proper maintenance of sexual functions via an increase in libido and a reduction in the risk of impotence.

In a study of 4,628 people, those who consumed the most ginger – 2 to 4 grams per day – had the lowest risk of developing hypertension (source).

Consumed fresh, this aromatic herb would be an excellent natural vasodilator. Indeed, rosemary is rich in antioxidants and can therefore contribute to the protection of blood vessels (source).

In addition to having interesting virtues on health, honey would play a major role in vasodilation and would therefore be beneficial if you suffer from blood circulation problems (source). It could also be useful for people suffering from erectile dysfunction (source) by increasing blood flow to the penis.

To enjoy its effects, it is best to choose all-natural honey. For consumption, it is advisable to take it in the form of an infusion, in the morning on an empty stomach.

This shrub has small orange fruits. These are rich in vitamins A and C, antioxidants and fatty acids. In traditional medicine, the strawberry tree is mainly used to lower blood pressure. Indeed, it would have vasodilating properties thereby improving blood circulation and thereby reducing blood pressure (source).

Turmeric is also a natural vasodilator. Indeed, it would increase blood flow and reduce blood pressure by dilating the vessels. The many properties of turmeric are due to curcumin, a compound that aids the body in the production of nitric oxide.

This would facilitate blood circulation and reduce the inflammation of the vessels. In addition, this compound could improve reduce oxidative stress and thus protect the body's tissues, in particular blood, muscle and erectile tissues via its antioxidant properties (source).

In a study of 39 people, taking 2000 mg of turmeric daily for 12 weeks resulted in a 37% increase in blood flow in the forearm and a 36% increase in the upper arm. superior (source).

Here is another spice recognized as a natural vasodilator. Its vasodilating effect would improve blood circulation in the sexual organs. Thus, this would help fight against erectile disorders and help maintain erections longer.

In addition, this spice has aphrodisiac properties to improve arousal and sexual desire (source).

Here is the last natural vasodilator on our list. Cayenne pepper, like its chili pepper, contains capsaicin which promotes blood circulation, improves nitric oxide production and can reduce blood pressure.

Research also indicates that ingesting cayenne pepper would improve blood circulation as well as the elasticity and resistance of blood vessels (source).

To conclude, you now know the properties of natural vasodilators as well as the 20 foods that increase blood flow to the penis. Now it's up to you to use these ingredients wisely.