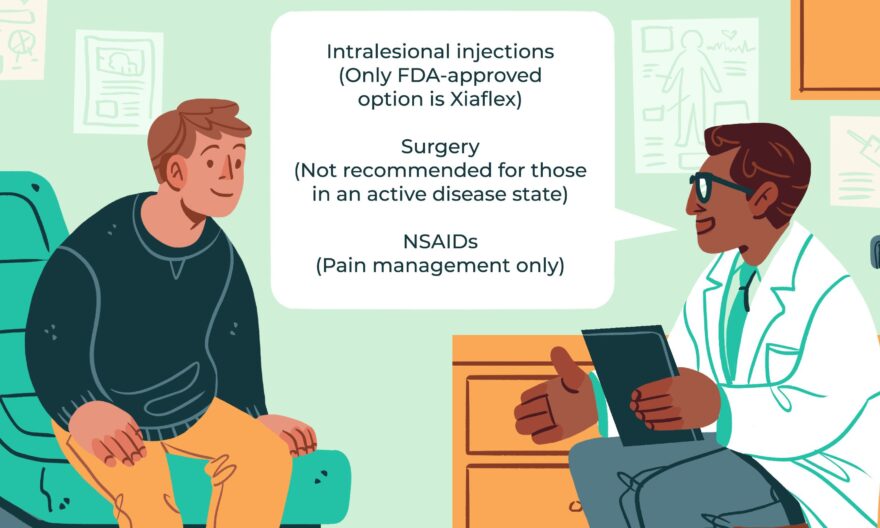 Peyronie's disease causes abnormal fibrous masses (plaques) that form inside the erectile tissue of the penis. This can cause an erect penis to curve or bend. Some men with Peyronie's disease have developed other forms of fibrosis, or plaques, such as Dupuytren's disease. Treatment can include medications and surgery.

Peyronie's disease causes abnormal fibrous masses (plaques) that form inside the erectile tissue of the penis. Over time, these plaques can grow and distort the erect penis, eventually causing curvature.

Peyronie's disease usually affects the upper part of the penis, but it can sometimes target the lower part or the side parts. An infection or injury to the penis can lead to Peyronie's disease, but the cause remains unknown in the majority of cases.

The disorder is more common in middle-aged and middle-aged men. Peyronie's disease affects about three percent of men between the ages of 30 and 80. There is no cure and this disease is difficult to treat.

About 16 to 20 percent of men with Peyronie's disease develop other forms of fibrosis, or plaques. Dupuytren's disease is a common example – the shortening of the connective tissue in the palm of the hand, which causes one or more of the fingers to begin to close (most often the little finger or ring finger are affected).

Peyronie's disease can be mild, moderate or severe. It may come on suddenly or progress slowly over a period of weeks or months.

Symptom progression may include:

– A small localized pain or discomfort that is felt in the penis. – A kind of lump at the location of the pain (the lump may be painless). – Plaques expand and contract, bending and strangling the erect penis on the affected side. – Erections become uncomfortable or painful. – Erections are softer than usual. – There can be one or more plates.

The structure of the penis

The erectile tissue of the penis – called the corpora cavernosa, or bodily organs – looks like two bars running the length of the penis. There are blood vessels inside these "bars". During sexual arousal, the nerves that innervate the penis allow these relatively empty blood vessels to open and fill with blood, causing an erection.

Peyronie's disease tends to start in the membrane that covers body organs. It can also progress and invade the erectile tissue. The contraction of the plaques causes the penis to bend and the invasion of body organs interferes with blood flow, making it difficult to erect the penis.

The plaque most often develops on the upper side of the penis, causing it to curve upwards. Sometimes plaque grows on the underside, which means penis curves will go downward. In a small number of cases, the two plates push on the upper and lower sides, which shortens and deforms the penis.

The causes of Peyronie's disease

In most cases, the cause of Peyronie's disease is unknown. Some of the known causes and risk factors include:

– Injuries to the penis, such as bending the erect penis hard enough to rupture the membrane that lines the blood vessels – Family history (which may suggest a genetic factor) – An inherited collagen abnormality in the genes that regulate growth fibrous connective tissue proteins (collagen) – An infection of the penis – An autoimmune response, which causes plaques to form – Certain medications, including blood pressure medications (beta-blockers), interferon and anti-epileptic drugs.

Peyronie's disease is diagnosed using a number of tests, including:

– Medical and sexual history – Clinical examination – Ultrasound of the penis.

– A 'watch and wait' approach – in some cases, Peyronie's disease resolves without medical intervention. The reasons are unknown.

– Medications – including anti-inflammatory drugs, colchicine, vitamin E and pentoxifylline. If the symptoms have not improved within a year of treatment, it is assumed that medication will not be able to resolve the situation. – Injections directly into plaque – an enzyme called collagenase can be used to soften plaque, or a medicine called verapamil can be used to dilate blood vessels.

– Penis traction device – this has been found useful during medical treatment to lengthen the penis and reduce the curve when erect. Studies have also shown that using a penis traction device can increase penis width, suggesting a benefit in the treatment of Peyronie's disease. It has also been used before and after surgery to prevent penile shortening.

– Surgery – this is an option for men with Peyronie's disease who have not responded to traditional or medical treatments for a year and still have difficulty with sexual intercourse.

If other forms of treatment are not effective, surgery may be offered as an option. Common surgical options include:

– Nesbit intervention or incision and plication – the membrane that covers the body on the side opposite to that where the plate is located is plicated (folded). The penis straightens. This procedure does not change the length of the penis – any shortening of the penis is caused by the disease itself.

– Plate Incision with Vein Graft – Incisions are made along the plate to allow the penis to straighten. Vein grafts are used to facilitate blood flow. This surgery is used for the most severe forms of curvature.

– The penile prosthesis – a device (with a pump) is used to straighten and harden the penis. This may be necessary when erection is not possible due to illness.

Where to get help

– your doctor – A urologist

What you must remember

– Peyronie's disease causes abnormal fibrous masses (plaques) that form inside the erectile tissue of the penis.

– Over time, these plaques can grow and deform the erect penis, causing it to bend. – Sometimes the condition improves without any treatment.