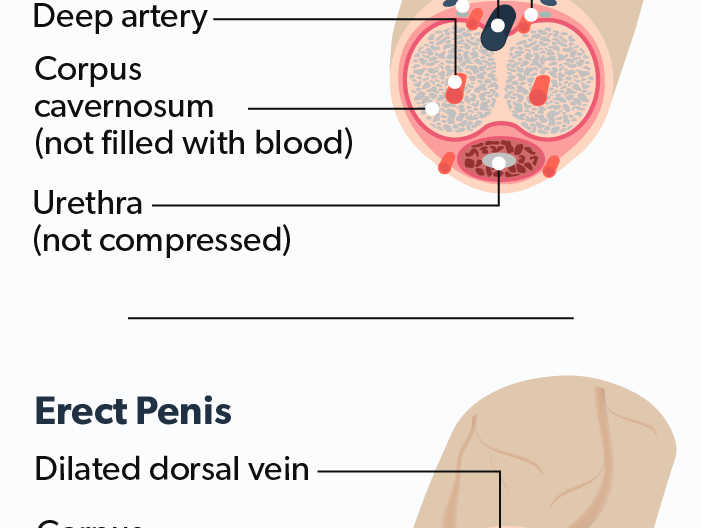 Priapism is defined as a persistent, painful erection that lasts longer than 4 hours. This erection disorder can have serious consequences on your health and lead to sexual dysfunction if it is not treated in time. Between cause, symptoms, diagnosis and treatment, here is everything you need to know about priapism.

1 Definition of priapism
2 Better understand the symptoms and the attack of priapism
3 What are the possible causes of priapism?
4 Possible complications
5 How can a doctor diagnose priapism?
6 Female priapism: clitoris
7 Current care and treatments

Priapism is a pathological condition defined by erections (source):

– Persistent: any erection lasting more than 4 hours is considered abnormal and must be subject to medical supervision. – Painful (optional): it all depends on the type of priapism to which you are subject. Severe pain in the penis may occur. – Involuntary: the penis goes into erection without you necessarily being sexually excited.

This erectile dysfunction is rare and generally affects men over 30 (source). There are 2 different types of priapisms namely:

– Ischemic or low flow: This is the most common form of priapism. It is characterized by very poor blood circulation and severe pain in the penis. Generally, this form is due to a blockage of blood in the erectile chambers. (source). – Non-ischemic or high-flow: Rarer and often less painful, high-flow priapism is characterized by blood circulation at very high pressure. Generally, this condition results in a ruptured artery following an injury or lesion to the penis or perineum (source).

Better understand the symptoms and the crisis of priapism

An abnormal erection that lasts several hours is a medical emergency. Indeed, the blood present at the level of the sex no longer circulates and will then be deprived of oxygen. In this way, the tissues of the penis will not be oxygenated either, which can lead to lesions or even the destruction of the penile tissues.

Ultimately, this type of pathophysiology can lead to permanent erectile dysfunction. It is therefore important to know the symptoms associated with an attack of priapism. Indeed, this will allow you to take control of the situation more quickly.

As explained above, a crisis of priapism is characterized by:

– An uncontrolled erection without prior sexual stimulation. – Potential pain whose intensity can vary according to the type of priapism and according to the individual. – An erection that lasts more than 4 hours.

Other symptoms can be added to this list such as:

– Absence of ejaculation following erection. – The erection is abnormal and the glans is not swollen and remains soft.

Uncontrolled erection can happen at any time of the day. When it occurs at night, specialists speak of nocturnal priapism.

What are the possible causes of priapism?

The causes of priapism can be many and can diverge according to the ischemic and non-ischemic type. Among other things, it is possible to divide the causes into 2 distinct categories: pathological and drug-related.

Priapism is symptomatic of a blood flow problem in your penis. In the case of high flow priapism the reason is often a damaged artery in your sexual functions.

This sends an abnormally high pressure of blood to the level of the penis thus putting it in erection.

In the case of low-flow or ischemic priapism, the condition is often symptomatic of another disease such as (source):

– Formation of a clot in the blood vessels of the penis. – Sickle cell disease (genetic condition that affects red blood cells). – Some cases of leukemia, sickle cell anemia but also bleeding disorders. – Problems with blood drainage through the veins of the cavernous body of the penis. – Certain types of cancer such as multiple myeloma.

Some treatments can cause priapism. A scientific journal listed all drugs known to be able to induce priapism as a side effect. Among these drug treatments there are (source):

– Beta-blockers (to fight against high blood pressure) – Certain antidepressants such as trazodone and anxiolytics. – Anxiolytics. – Treatments for erectile dysfunction : improperly administered Viagra can cause this type of complication. Also, papaverine injections which are administered as a solution to male sexual impotence can induce an uncontrolled erection. – Neuroleptics or psychotropics : often administered against mental disorders or hyperactivity. – Blood thinners. – A penis ring that is too tight. – Hormonal therapies.

Also, priapism can be caused by excessive alcohol, drugs or poisoning such as a bite from the black widow spider (source) or overexposure to carbon monoxide (source).

New side effect of Covid-19?

A French research team highlighted in 2020 that Covid-19, also called Sars Cov-2, could cause a persistent and uncontrolled erection similar to priapism in some patients (source).

Priapism can be induced by many pathologies and therapeutic treatments. However, this uncontrolled erection can also give rise to complications, especially if it is not treated as soon as possible.

Among others, the possible complications are:

– Ischemia : this is the decrease in blood supply to an organ and this results in this case in oxygen deprivation in the penis and sexual functions. – Thrombosis : blood clotting is blocked in the penis. – Erectile dysfunction or impotence : damaged tissues, in particular those of the blood vessels of the sex, can cause erection problems in the long term. – Gangrene : in the most serious cases, gangrene can occur following priapism (source).

How can a doctor diagnose priapism?

If you have the symptoms associated with priapism, you will need to consult a health professional as soon as possible. Indeed, he will start by carrying out diagnostic examinations in order to verify your doubts.

Subsequently, additional tests will be carried out to find out the type of priapism you are suffering from. Indeed, the treatments will be different depending on the causes of the uncontrolled erection. For this, the examinations carried out can be the following.

In addition to the first test, the healthcare professional can perform a more in-depth blood test. This will aim to find out the cause of priapism. For this, the analysts will measure the rate of red blood cells and platelets.

This test can help your doctor diagnose possible blood disorders (such as sickle cell anemia), cancer, or sickle cell disease.

As explained above, one of the causes of priapism can be drug abuse, alcohol abuse, poisoning or drug treatment. Thus, to rule out or confirm this hypothesis, the doctor may take a urine sample in order to detect any toxicological traces.

If your doctor suspects high-flow priapism, they may order an ultrasound. This will aim to determine the type of trauma or injury beneath adjacent to your erectile dysfunction.

The clitoris can also have an erectile function. Thus, the female organ can also suffer from priapism. In this case, we are talking about clitorism, female priapism (source). This condition is very similar to male uncontrolled erection.

Indeed, the causes and symptoms are similar. The woman will then be able to experience a painful, prolonged erection without sexual arousal. In the same way as for the male condition, it is strongly recommended to consult a doctor as soon as possible.

Initially, the doctor who takes care of a patient with priapism aims to:

– Relieve the patient and put an end to the erection. – Find the cause. – Avoid recurrence.

Thereafter, the treatment administered will depend on the type of uncontrolled erection you are prone to.

So, if you are prone to high-flow or also called non-ischemic priapism, immediate treatment may not be necessary. Indeed, depending on the case, this erection could disappear on its own.

In this way, the doctor will be able to observe you before prescribing a treatment. Thereafter, the therapies used can be (source):

Applying a block of ice to your penis: indeed, cold therapy can stop the involuntary erection. Surgical intervention : if it is not possible to stop the erection, the specialist may suggest an operation to repair the damaged vessels.

In the case of low-flow priapism, treatment seems essential. Indeed, your penis will not be sufficiently irrigated with oxygen. Thus, it will be necessary to intervene quickly in order to avoid a potential complication.

In this case, several treatments can be advanced:

– Elimination of excess blood from the penis: the professional will use a needle and syringe to eliminate any obstruction present. In general, this intervention will make it possible to stop the uncontrolled erection and relieve the pain (source). Drug injection: in some cases, drug treatment is necessary. The objective is to dilate the blood vessels present in the penis and perineum. Thus, with this therapy, your blood flow will increase and the erection will disappear (source). Surgical intervention: in the event that none of the other therapies work, an operation may be considered in order to improve the blood circulation of your sex (source).

To conclude, priapism is a medical emergency characterized by an involuntary, persistent and often painful erection.

There is a female priapism called clitorismo.

In both cases, it is important to consult a health professional as soon as possible. Indeed, he will be able to diagnose you and offer you an adequate treatment in order to relieve you and avoid a potential medical complication.