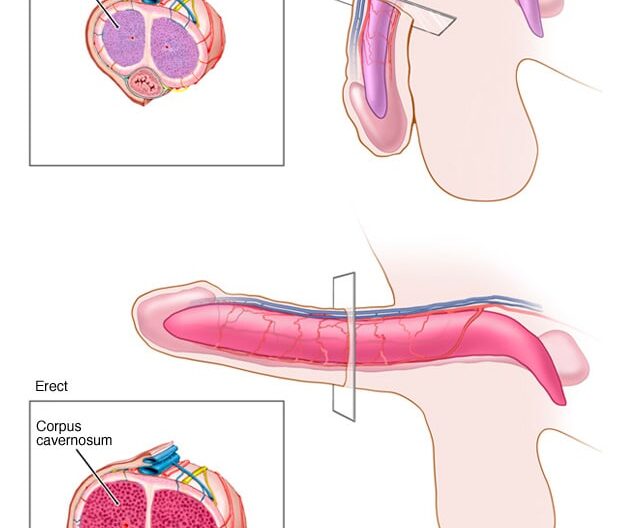 Erectile dysfunction: what is it?

Erectile dysfunction, more commonly called "soft erection", results in the inability to maintain, or even in the most serious cases to acquire, a strong erection for sexual intercourse. To be diagnosed as such, this erectile disorder must occur several times for a minimum of 3 months. Small "occasional breakdowns" due to temporary tension or fatigue are therefore excluded… Contrary to certain received ideas, this is a frequent problem: according to scientific studies, more than 50% of men aged 40 to 70 years are indeed affected by erectile dysfunction! Between the feeling of guilt, shame and frustration, it is unfortunately still a taboo problem which can prove to be disabling for both partners but which, fortunately, is not without solutions…

A so-called normal erection involves the proper functioning of the nervous, hormonal, muscular, circulatory and brain systems. Their synergy allows the blood filling and, in fact, the increase in volume and firmness of the erectile tissues of the penis. The causes of erectile dysfunction can thus be physiological, but also psychological, or involve both at the same time. They are many and varied…

This type of dysfunction is more common in men over the age of 50. Its installation is gradual. It results in an absence of morning or night erections and makes it impossible to maintain, or even obtain, an erection, regardless of the quality or quantity of sexual stimulation.

Physiological erectile dysfunction can thus be caused by:

– Diabetes. One to two thirds of diabetics are affected by erectile dysfunction. Unstable blood sugar can indeed disrupt the chemical process induced by sexual stimulation and allowing erection. By lowering the amount of nitric oxide in the body, the hyperglycemia generated by diabetes also leads to a drop in blood flow to the penis, resulting in a soft erection. – Disorders of the vascular system such as atherosclerosis, an arterial degeneration caused by the accumulation of lipid plaques of atheroma preventing a normal flow of blood in the vessels of the penis. – Hypertension is also often responsible for impotence in men. – Taking certain medicinal treatments such as antidepressants, antipsychotics, anxiolytics and anti-epileptics which can induce erectile dysfunction. – Smoking which, according to studies, increases the risk of erectile dysfunction by 30 to 70%. The toxic substances in tobacco promote the arterial hypertension and atherosclerosis mentioned above, as well as the non-sealing of the vascular system of the penis. Peyronie's disease, which affects 1% of men and results in an abnormal deformation of the erect penis due to fibrous thickening. Although often benign, it can however, in some cases, generate severe pain during erection, or even completely prevent it. – Removal of the prostate which can cause damage to the nerves connecting the prostate to the penis. – Certain diseases of the nervous system, such as multiple sclerosis, which prevent good communication between the cerebral and genital systems. – Hormonal disorders, widespread especially among people practicing bodybuilding and using steroids.

This type of dysfunction results in the preservation of a morning or night erection. Its onset is sudden and linked to specific circumstances.

– Marriage problems. – A weariness or trivialization of the sexual relationship. – Severe tiredness. – Financial or professional difficulties. – Performance anxiety during sex.

Solutions exist for most individuals suffering from erectile dysfunction.

For disorders of physiological origin, the doctor can prescribe to his patient:

– Oral treatments, such as Tadalafil, Sildenafil or Male extra, allowing the dilation of the blood vessels of the penis. – A trans-urethral treatment, that is to say the insertion into the urethra of a tiny suppository allowing the relaxation of the muscles of the penis. – An anti-tobacco treatment via, in particular, nicotine substitutes. – The adoption of a diet less rich in fats and the regular practice of exercise allowing better oxygenation and better blood flow. – Peyronie's disease treatment or surgery. – Penile injections consisting of the introduction of prostaglandin into the penis. – As a very last resort, an inflatable silicone penile implant implanted under the skin of the penis.

With regard to disorders of psychological origin, the solutions are:

– Good communication between partners which can be improved by couple visits to a sexologist. – Relativization. – The practice of relaxation exercises such as yoga. – A rediscovery of one's sexuality via various stimulations such as caresses and kisses.