The Presence Of Blood In The Semen: What Are The Causes? 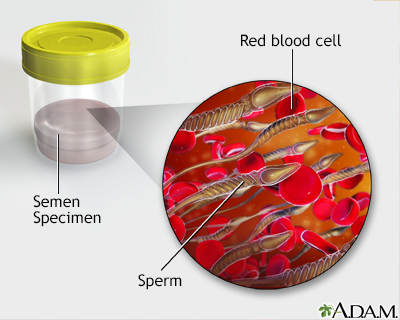 Hematospermia (sometimes called hemospermia) is the presence of blood in semen. Men may notice that their semen has a pinkish, reddish-brown tint, or contains a few drops of blood. But these drops are sometimes microscopic and therefore invisible to the naked eye.

When sperm are secreted by the testes, they flow to the seminal vesicles, where they mix with the other ejaculatory fluids that make up semen. After that, the semen joins the ejaculatory ducts before being expelled from the penis during male orgasm. Bleeding can occur at any stage of this process.

The presence of blood in the semen may seem worrying, but this phenomenon is generally not serious. Hematospermia often disappears spontaneously.

However, men who notice the presence of blood in their semen should imperatively consult a doctor, especially if they notice other symptoms, such as:

– the presence of blood in their urine – pain during urination, ejaculation, or defecation – swelling in the scrotum or groin – fever or chills.

Hematospermia can be caused by some of the following causes:

– Sexually transmitted infections like chlamydia, genital herpes and gonorrhea can cause blood in the semen

– Prostate disorders. A man can find blood in his semen if he has had a prostate biopsy or has an enlarged prostate. Prostatitis (inflammation of the prostate) is another possible cause.

– Brachytherapy is a radiotherapy technique, the latter is used to treat prostate cancer. Small seeds of radioactive iodine are implanted directly into the prostate gland and this treatment can cause hematospermia in some patients.

– Injury or trauma to the genitals. These can occur in a variety of situations, including a car accident, playing sports, or rough sex.

– A vasectomy. Some men may notice bleeding soon after having this operation.

– Cancer. In very rare cases, hematospermia is a symptom of testicular or prostate cancer.

Some men may find blood in their semen when they end up having sex or if they haven't had sex for a long time.

If blood in the semen is the only noticeable symptom, treatment is probably not necessary. However, we recommend that men affected consult a doctor.

If there are other symptoms, a urologist can perform tests to determine the cause of the bleeding. These may include spermogram, urinalysis, X-ray, ultrasound or rectal examination. If an underlying pathology is identified, it can be treated and in most cases, the blood present in the semen will eventually disappear. If it is an infection, the patient will need to take antibiotics in order to treat it.