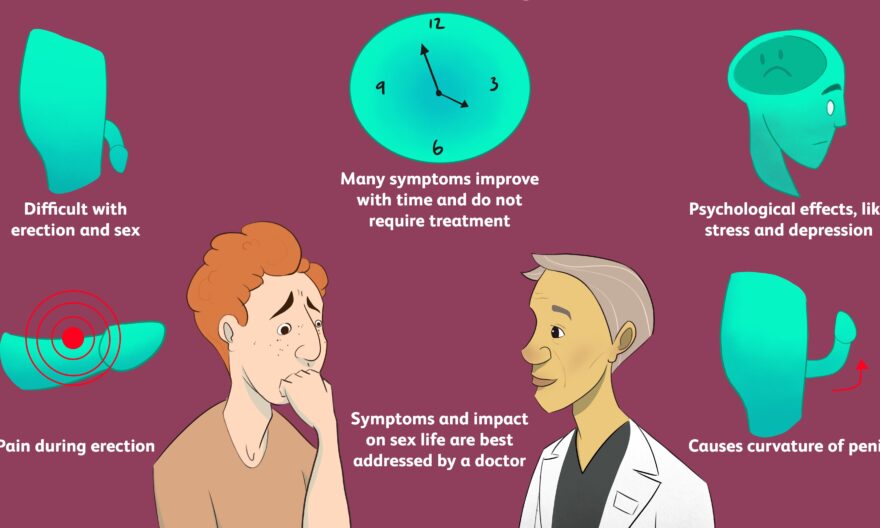 Most people have a slight curvature in their penis which is more prominent when the penis is erect. If your penis curves a little to the right or left when erect, there should be nothing to worry about. However, if you have a significant upward or downward curvature that causes pain and discomfort during intercourse or is aesthetically displeasing, it is time to seek treatment, as this may be a symptom. of Peyronie's disease. Read on for medical recommendations on how to straighten a twisted penis.

What is Peyronie's disease?

The causes of Peyronie's disease

Most researchers believe that this condition occurs when the penis is injured or abnormally bent. Unfortunately, most men cannot remember a specific event that caused an injury to their penis leading to Peyronie's disease. It is believed that this condition is likely due to small, unrecognized injuries that occur during sex. However, not all men who injure themselves during sex develop this condition, so there is a chance that genetics comes into play in some way. There are also several health issues related to Peyronie's disease. These include hyperglycemia, pelvic trauma, and autoimmune diseases. Whatever the cause of your condition, we know how to straighten a bent or twisted penis.

Here are some symptoms of Peyronie's disease:

Peyronie's disease can make it impossible to have sex due to the level of pain and discomfort for either partner. It could also lead to erectile dysfunction. Fortunately, there are several ways to treat this disease.

How to straighten a twisted penis?

Depending on the severity of your symptoms, your doctor may recommend surgical or non-surgical treatment. The type of treatment also depends on whether the disease is in the acute or chronic phase.

Surgery can be quite effective in treating this disease, although it is expensive and has significant downtime. However, it has one major drawback which is penile shortening, especially if used to treat severe penile curvature. And, as with any surgery, there can be risks and complications. We always urge people to research alternative options on how to straighten a bent penis before considering surgery.

There are also several injections that are used to cure this disease. These drugs are injected directly into the plaque, but they are most effective when the disease is in the acute phase. To minimize pain, the injection area should be numbed before administering the injection. Common injections used include intralesional injections of collagenase, verapamil, and interferon-alpha 2b. The disadvantage of injections is that they must be injected directly into the plaque, which is not always easy to locate.

The main non-drug, non-surgical therapy used to treat Peyronie's disease is sound wave therapy, either a radial wave or an electromagnetic wave. It is a non-invasive and painless option for the treatment of Peyronie's disease. This method has proven to be a viable alternative to surgery and medication, and is believed to be the most effective treatment for this condition.

To add to its benefits, sound wave therapy is painless and does not require recovery time. This makes it a viable alternative for someone looking for a non-invasive and painless treatment.