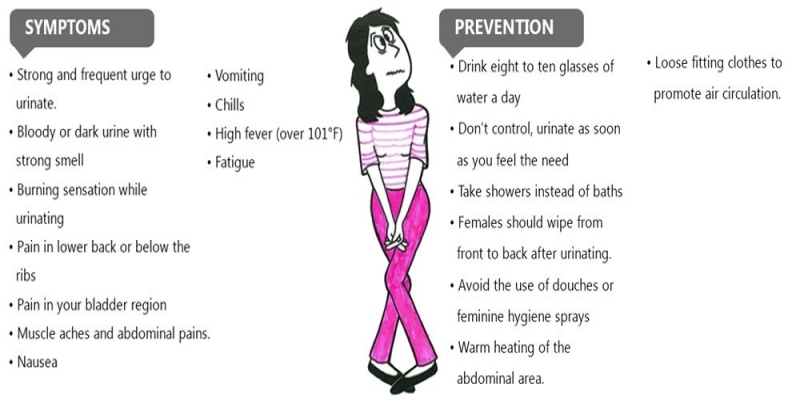 A urinary tract infection, sometimes called cystitis, occurs when bacteria from the bladder or kidneys multiply in urine and enter the urinary tract. UTIs are not necessarily sexually transmitted, but being sexually active can increase the likelihood of developing a UTI due to bacteria being transferred during sex between the vagina, rectum, and urethra.

UTIs are relatively common in both men and women, but women tend to develop UTIs much more easily than men due to female anatomy. The distance between a woman's bladder and the opening of the urethra is relatively short, with the opening close to the vagina and rectum, making the transfer of bacteria possible and rapid. Brown University has shown that approximately 50 to 80 percent of women will develop UTIs during their lifetime, and 20 to 50 percent of these women will have recurrent UTIs.

Symptoms of a UTI

Symptoms of a UTI include cloudy urine, blood in the urine, foul odor, strong smelling urine in the morning, frequent or urgent urination, pain or burning sensation during urination, an urge to urinate with very little urine coming out, night sweats, shaking or chills, pressure in the lower pelvis, and low-grade fever. Men may feel some heaviness in the rectum.

A UTI can occur anywhere along the urinary tract. In general, the higher the infection is located in the urinary tract, the more serious it is. The most common type of urinary tract infection is cystitis, or infection or inflammation of the bladder that causes frequent and painful urination. An infection of the urethra is called urethritis, and it causes burning urination. In men, urethritis can also cause discharge from the penis. Pyelonephritis occurs when an infection in the bladder spreads to the kidneys, causing upper back pain, tremors, chills, nausea and vomiting. UTI in men can lead to prostatitis, or prostate enlargement.

Older people are more at risk of developing a urinary tract infection than others. This is partly due to their high susceptibility to all infections due to immune system suppression which is the result of aging and certain age-related health conditions such as diabetes, an enlarged prostate or stones. kidneys. Older men and women experience weakening of the bladder muscles, which leads to greater retention of urine in the bladder, poor urination and urinary incontinence, all of which can lead to the development of a UTI. Use of a urinary catheter, bowel incontinence, immobility, and any surgery to the area around the bladder can increase the risk of UTI.

When an older person has a UTI, they don't always experience the same common symptoms, such as fever or painful urination, of the infection mentioned earlier in this article. According to the National Institutes of Health, UTIs in older adults are often mistaken for the early stages of dementia or Alzheimer's disease because symptoms include confusion or delirium, restlessness, poor motor skills, dizziness, hallucinations, or falling.

The risk of developing a UTI is higher in people with incontinence who use disposable adult briefs because these products stay in close contact with the skin and can reintroduce bacteria into the bladder. Recommendations to reduce UTIs in these people include changing panties frequently, encouraging front-to-back wiping, keeping the genital area clean, and setting reminders or timers for people with a mental disability in order to encourage the use of the bathroom instead of adult diapers.

What can a urinary tract infection cause?

UTIs can cause tissue damage in the urethra, bladder, and/or kidneys. Left untreated, a UTI can lead to acute or chronic kidney infections, kidney damage, kidney failure, or sepsis, which is a life-threatening bloodstream infection. Healthcare professionals prescribe antibiotics for the treatment of UTIs in both men and women. These antibiotics include sulfamethoxazole-trimethoprim, amoxicillin, nitrofurantoin, ampicillin, ciprofloxacin, and levofloxacin. UTI symptoms usually go away after a few days of treatment, but antibiotics should be taken for as long as prescribed to completely clear up the bacterial infection. In cases of extreme pain while urinating, analgesics or pain medications may also be prescribed. Some bladder medications can discolor urine, turning it bright orange or red.

How to avoid urinary tract infections?

Ways to reduce UTIs among all age groups are to drink 2-4 liters of water a day, avoid caffeine and alcohol consumption which can irritate the bladder, wear loose pants and cotton briefs cotton, which must be changed at least once a day and not worn at night while sleeping. It is also recommended to urinate frequently, completely emptying the bladder each time. For people without a personal or family history of kidney stones, drinking cranberry juice may help reduce the rate of UTIs. (Note: Cranberry juice may cause kidney stones to form in some people.) Women should not douche, should always wipe back and forth, and change pads and tampons frequently during menstruation..

People with symptoms of a UTI should see a doctor as soon as possible. For older people, any changes in behavior should be reported to a medical professional as this may be a silent sign of a UTI.