Viagra Vs Cialis: What's The Difference? 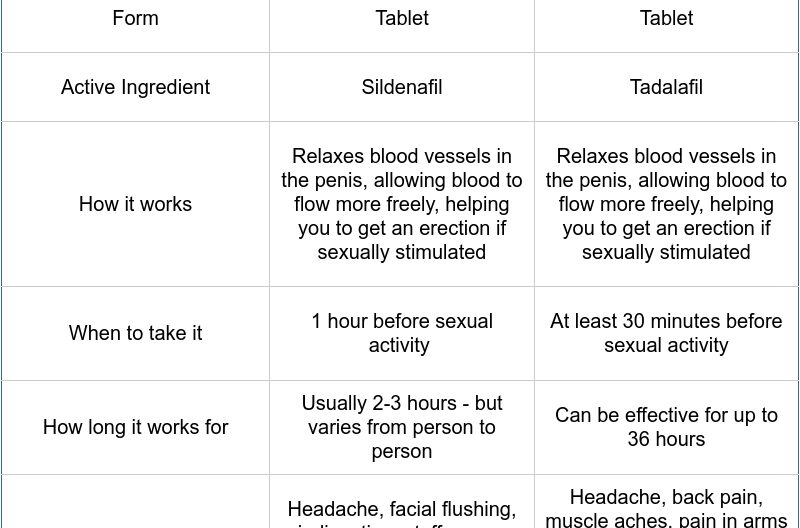 Is there a difference between erectile dysfunction drugs? Is viagra more effective than cialis? There is no simple answer to these questions. People are not all the same, and what works well for one person may not work for another. However, it is certainly worth considering the characteristics of each drug. With this information, you will be able to make an informed decision about viagra and cialis.

Viagra versus Cialis: The mechanism of action

Viagra (sildenafil) and cialis (tadalafil) work very similarly. Both drugs increase blood flow to the penis so that when a man is sexually stimulated he can achieve and maintain an erection. Viagra and Cialis belong to a class of drugs called ( PDE5 inhibitors ), which enhance the effect of nitric oxide, a chemical that is normally released during stimulation. Nitric oxide opens and at the same time relaxes the blood vessels in the penis, which facilitates the circulation of blood allowing erections to last longer.

It is important to know that neither is an aphrodisiac. You need to feel sexually aroused in order to induce erections using viagra and cialis.

Viagra is usually prescribed in a dose of 50mg, it is usually taken one hour before sexual activity. Based on efficacy and tolerability, the dose may be increased to 100 mg as the maximum dose or 25 mg reduced. For most patients, the maximum recommended dose is once daily. Viagra is best taken on an empty stomach as its action may be delayed or impaired when taken with food (especially high fat foods).

Cialis is usually prescribed in a dose of 10mg, taken 45 minutes before sexual activity. Based on efficacy and tolerability, the dose may be increased to a maximum dose of 20 mg or reduced to 5 mg. For most patients, the maximum recommended dose is once daily. Cialis can be taken with or without food.

Viagra and Cialis have a 60-70% effectiveness rate on men with erectile dysfunction.

There are very few comparative studies between Viagra and Cialis. Also, it is difficult to make comparisons between studies, since different studies use different measures of effectiveness (e.g. improved sexual function versus improved sexual satisfaction).

Viagra takes effect for around four to five hours, but with Cialis the window of opportunity ranges from 24 to 36 hours, which is why it's sometimes called "the weekend drug." For couples who want sexual spontaneity, Cialis seems to have a competitive advantage over time.

With the low dose version of Cialis for daily use, there is a steady supply in the blood. Theoretically, this option makes it possible to have sex without any prior planning.

Viagra and Cialis have similar side effects. The most common side effect is headache, which affects 16% of patients. Other common side effects include nasal congestion, facial flushing, upset stomach, and urinary tract infections. Back pain and muscle aches can occur with Cialis, but rarely with Viagra.

In some cases, men taking Viagra and Cialis may experience temporary vision problems, primarily a blue tint to vision or difficulty distinguishing between blue and green colors. A very rare but very serious side effect associated with both Viagra and Cialis is priapism (an abnormally long and painful erection). If not treated quickly, it can cause erectile dysfunction.

What alternative without side effects?

Is your sex life getting more and more boring with each passing day? Do you feel the need for change, something that can help you regain your sexual performance and lost charm?

Do you need a one-stop natural solution for all your sexual concerns? If so, we present to you Male Extra. (Discover it by clicking here)

Viagra and Cialis have many more similarities than differences. Both drugs appear to be safe and effective. Cialis lasts longer, allowing for greater sexual spontaneity, and can be taken with food. However, Cialis side effects may be prolonged and there may be an increased risk of drug interactions.

If you suffer from erectile dysfunction, a complete physical examination must be carried out by your doctor or a urologist. In some cases erectile dysfunction can be a sign of an underlying medical condition. Your doctor can determine if other conditions are involved and help you decide on the best course of action.