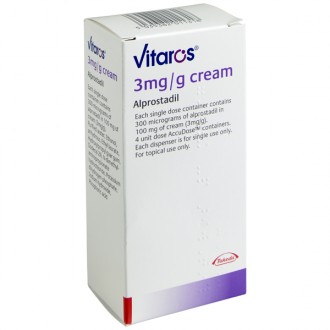 Vitaros is a medicine to fight against erectile dysfunction. Like medical treatments, it is necessary to have a doctor's prescription to use Vitaros. We explain in detail its composition, how it works and its side effects in this Vitaros review.

Our opinion on Vitaros in a nutshell

Our opinion on Vitaros is positive because its effects on erectile dysfunction have been scientifically demonstrated. However, as with any medical treatment, it is important to be subject to medical supervision and to obtain a prescription from your attending physician in order to use this type of product.

In addition, Vitaros can have serious side effects, especially if the dosage of the drug is not respected. We explain all this in our Vitaros review.

Vitaros is a delay gel that should be applied topically to treat erectile dysfunction or impotence. We will return more precisely to the methods of application, but it must be introduced into the urethra, using a small pipette.

Concretely, this treatment will act by penetrating into the blood and dilating the blood vessels. This will fill the cavernous bodies of the penis, and therefore have a better erection. It comes in several dosages, namely 200 and 300 mcg.

Available only by prescription, it is prescribed to treat male impotence. Thus, it is among the most popular drugs for this type of sexual disorder along with Viagra and Cialis.

Manufactured by the French laboratory Majorelle, and marketed in 2015, it acts in a few minutes (up to half an hour) and its effects are present for one to two hours.

Vitaros is therefore a cream produced by a French pharmacological laboratory and its composition is strictly controlled. Here are the elements that make up Vitaros.

How to use Vitaros? Everything about its dosage

There are two different strengths of Vitaros. As this cream is only available on prescription, it is your doctor who can direct you to the most relevant form in your case. You will therefore have the choice between a dosage of 200 or 300 µg (for the most severe cases) of the active ingredient of this local treatment.

A lower dosage will be recommended for people who do not tolerate this type of product well.

For each dose, you will need to limit yourself to one dosage and not reuse it. Also be careful not to apply this cream more than three times a week. In addition, you must wait 24 hours before using Vitaros again.

Procedure to know to use Vitaros

To observe the results of this treatment (a strong erection that can last up to 2 hours ), you must apply it to your penis within half an hour before your sexual intercourse. Remember to wash your hands well first. Once you have removed the single dose from its packaging, strictly follow the instructions given with the treatment.

Here is a reminder of how to use Vitaros cream:

1. Begin by removing your dose from the sachet. 2. Warm up your single dose by rubbing it between your hands to bring the cream to room temperature. 3. Turn the accudose pusher several times to be sure that the 4. Grasp your penis in one hand and gently squeeze the tip to widen the opening of the urethra. 5. Keeping your hand on your penis, gently place the cream in the opening, taking care not to get the accudose into the urethra. 6. Hold the penis in a vertical position for 30 seconds to ensure good penetration of the cream. Then push the excess cream inside the opening with your finger.

Certain precautions must be taken to ensure that the cream works properly:

– do not urinate directly after application: the cream could then be ejected. – always store the sachets in the refrigerator between 2 and 8 degrees Celsius: poor storage could alter the composition of the cream. – never use more than 1 dose per use, even if part of the accudose has not been correctly deposited. – wash your hands after using the tube: in fact, Vitaros can cause eye irritation.

What are the effects and benefits of Vitaros?

The active ingredient of Vitaros is well known but has so far been used only in the form of an invasive treatment either by intra cavernous injection or by application via an intra-urethral stick. In this way, Vitaros is the first drug using Alprostadil and being non-invasive.

Its effect, as previously explained, is to cause an erection within half an hour of its application. For this, the active principle will have a double action and will be able to act on the vasodilation of the blood vessels of the erectile tissue of the cavernous bodies but also to increase the blood flow in the penis.

This will cause the hardening of the penis and thus its erection.

The effects of Vitaros are ephemeral and last between 1 to 2 hours following the deposition of the cream.

Clinical studies have been carried out to shed light on the effects of Vitaros as well as its safety in treating erectile dysfunction and cases of impotence (source, source).

Vitaros opinion: side effects and contraindications

While Vitaros is a relatively safe treatment for erection problems, there are some side effects and contraindications to consider. First of all, this medicine can only be administered by prescription and you will then have to undergo a medical consultation.

While Vitaros is relatively safe, some side effects have been listed and should be brought to your attention by your doctor before taking it. The risks are:

More rarely, the use of Vitaros can cause:

– vertigo and dizziness; – prolonged erections (more than four hours); – too low blood pressure; – heart problems; – a narrowing of the urethra; – pain in the anus; – loss of sensitivity in your penis; – urinary inflammation.

To reduce the risk of side effects, it is strictly recommended to follow the dosage indicated by your healthcare professional. Also, it is essential to comply with the procedure described in the instructions for use.

Vitaros can prove to be an interesting treatment to fight against erectile dysfunction because the adverse interactions are less than the majority of other drugs. However, Vitaros may interact with:

To date, no study has been set up to study and prove these interactions. Thus, it is best to avoid combining these types of treatment with Vitaros to avoid potential consequences.

Certain contraindications have been put in place by the laboratory producing Vitaros. Thus, it is strictly not recommended to use this treatment if you are subject to one or more of the following characteristics:

Vitaros is only available by prescription and can be purchased from pharmacies. This product is part of the list I of drugs. Each box contains 4 single doses of 100mg at a concentration of 200 or 300 µg. The price of each box is 36.15 euros with a reimbursement rate of 15% by social security.

This price is displayed without dispensation fee which is 1.02 euros. Thus, the price of a box of Vitaros with dispensing fee is 37.17 euros.

The dispensing fee is an amount received by the pharmacist for any reimbursable drug, whether it has been the subject of a medical prescription or not.

Our final opinion on Vitaros

Our opinion of Vitaros is positive. This drug has undergone clinical studies and extensive review. It is also approved by the WHO and is part of the public drug database set up by the French government (source). Thus, Vitaros is effective in combating erectile dysfunction.

However, you will need a medical prescription to obtain this product. The reason for this is that Vitaros can have significant side effects if you are contraindicated.

Know that there are also natural remedies to fight against erectile dysfunction. These products are not drugs, do not require a prescription and have no side effects. However, unlike Vitaros, this type of treatment does not have an immediate effect and therefore it is taken in the form of a cure to cause the desired effects. This is the case of Viasil for example, of which you can find our analysis in our opinion on Viasil.