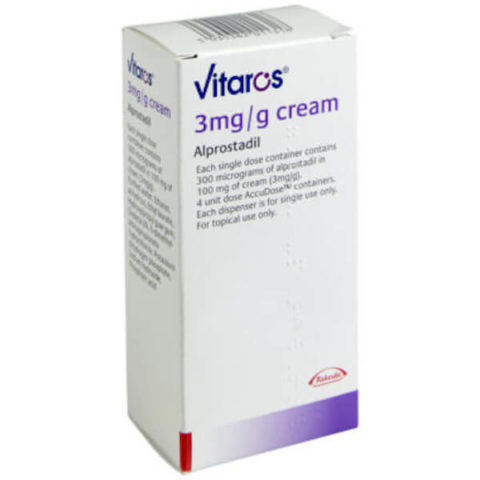 Many were waiting for an alternative to Viagra, Levitra and Cialis, to solve their erectile dysfunction problem, salvation finally came with Vitaros, an erection cream which has just been approved in France and which is already making a lot of noise for its formidable effectiveness.

Good to know about Vitaros Cream

– Vitaros is a drug authorized in France and in several European countries. – This cream guaranteeing erectile function is available only on prescription from June 1 – You can buy Vitaros on the Internet. – The cream applies like a balm. Vitaros is applied directly to the penis before intercourse. – This cream does not contain sidenafil, unlike the active ingredient found in Viagra, Vitaros contains alprostadil, a common vasodilator currently distributed as an injection or penile suppository to treat erectile dysfunction. – Vitaros is less invasive, the cream is not systematically absorbed by the body. This ensures Vitaros users avoid side effects especially those that occur after taking the pills. – Vitaros acts very quickly. The penis becomes erect very quickly. – It's safer. Unlike Viagra, Cialis and Levitra, Vitaros can be used even by patients on nitrate or alpha-blocker treatments. Patients with certain heart conditions or diabetes problems for which impotence drugs in the form of capsules, pills or tablets are clearly contraindicated (risk of very serious or even fatal drop in blood pressure) can use Vitaros safely – It has been extensively lab tested. Vitaros has been clinically tested in over 3300 patients, including some with underlying prostate problems, and proven to be both safe and incredibly effective. – It can also be used to heal wounds. Initially, Vitaros was recognized as a cream that helped heal deep wounds, encouraging blood supply and improving circulation to injured tissue.

Vitaros is a real revolution for the immediate treatment of impotence and erectile dysfunction problems. A simple cream to apply locally and without risks on the penis to have an erection almost instantaneously and without the need to absorb dangerous drugs.

Vitaros has been subjected to numerous tests and clinical trials to assess the risks of its use. Some patients reported feeling a "burning penis", but the sensation was mild and didn't last long. Also 6% of patients in the placebo control group (who therefore did not take this drug), reported having suffered the same side effect of burning sensation on the penis.

Vitaros acts quickly on the increase in blood flow which occurs within a few minutes after application of the cream, unlike pills and other oral medications which only take effect after half an hour. Also, while oral medications can have side effects that can lead to heart problems, headaches, muscle aches, hearing and vision difficulties, Vitaros does not cause such side effects.

Patients with diabetes or heart disease can apply the cream without any risk, while they could not take drugs like Viagra, Cialis or Levitra. Vitaros is also recommended for men who have undergone a prostatectomy.

What effective alternative to Vitaros? »

Proslution Gel is a very quick solution to your erectile dysfunction problem, just apply the gel to your penis and wait a few minutes for the gel to work.

Erectile dysfunction is a very common disorder with a profound impact on patients and their partners. Several options are now available for the treatment of ED; Oral pharmacotherapy with phosphodiesterase-5 (PDE5) inhibitors currently represents the emergency first-line option for many patients. Vitaros © / Virirec © is a new topical, non-invasive treatment for ED that offers the combination of an active drug (alprostadil, a synthetic PGE1) with a skin activator that enhances its local absorption directly to the site of action. Vitaros © / Virirec © has a favorable pharmacodynamic profile and is poorly absorbed into the systemic circulation. This makes it very suitable in all circumstances with results in reduced risk of adverse events (AEs), only 3% of systemic AEs reported in the treated population. Its clinical efficacy has been demonstrated in two phase II and III trials, showing an overall efficacy of up to 83% with the 300 pg dose in patients with severe erectile dysfunction, this is significantly superior to placebo. Its rapid onset of action along with its favorable toxicity profile and lack of interactions with other medications, makes Vitaros © / Virirec © a first-line treatment option for patients with erectile dysfunction, especially for men with erectile dysfunction. people who are reluctant to take systemic treatments or BEAs. It may also have an important role in patients unresponsive to PDE5 inhibitors, particularly those with erectile dysfunction after radical prostatectomy.