What Does Sperm Taste Like And Can You Change Or Modify Its Flavor? 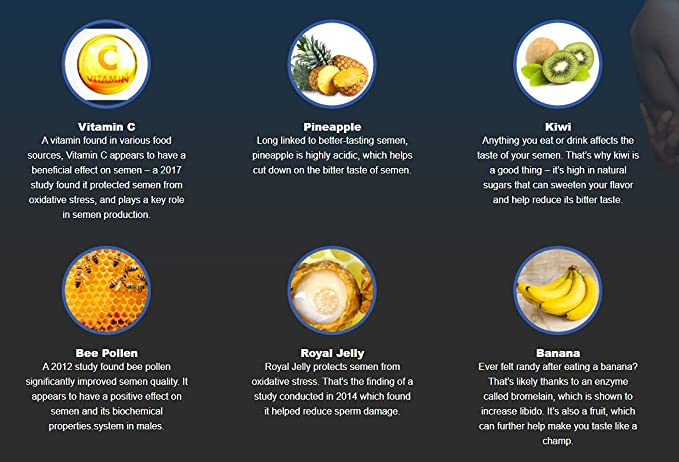 In general, semen has a salty and slightly bitter taste. Nevertheless, this taste can vary according to the individual, his rhythm of life as well as according to the composition of the sperm and the food ingested. Thus, we explain everything about the taste of sperm and how to modify its flavor.

1 What does semen taste like?
2 Can sperm be swallowed?
3 Is it good for your health to swallow semen?
4 How to change the taste of semen?

The taste of sperm comes above all from its composition. Indeed, the seminal liquor contains 90% of proteins, mineral salts and fructose which give a slightly bitter or even salty scent to sperm (source). However, depending on its sugar concentration, semen may turn out to be slightly sweet.

Similarly, oxidation of spermine, the most concentrated protein in semen, can change the taste, smell and color of semen. In this situation, you will notice yellow semen with a very strong and pungent smell and taste.

Namely that the taste of sperm depends on its composition, the food ingested and your lifestyle. Here is an overview of the different possible tastes of semen.

The taste of sperm is generally slightly bitter or even salty for some, despite the concentration of fructose. However, there are very few scientific studies on this subject or validating the taste of sperm (source).

Semen can also be very acrid

Alcohol, tobacco or drug abuse can affect the smell, color and taste of semen and make it acrid (source, source). Likewise, the frequency of your ejaculations can affect the smell of semen. Thus, when your sexual intercourse and your masturbations are too spaced out, the spermine contained in the stored sperm will oxidize to give a pungent and relatively unpleasant taste to the sperm (source).

Depending on the diet, semen may turn out to be softer in some individuals. Indeed, there are foods and lifestyles that reduce the bitter and salty side of sperm to make it softer and sweeter.

Can you swallow semen?

Following an oral ejaculation, there is no danger in swallowing semen since its composition is totally digestible. However, it is important to keep in mind that semen is one of the bodily fluids that transmits sexually transmitted diseases and infections.

Therefore, if you are unsure of the partner's screening status, it is advisable to refrain from swallowing semen. Also make sure of hygiene since it can also transmit viruses, such as genital herpes for example.

Is it healthy to swallow semen?

The nutritional value of sperm is particularly interesting since it includes many vitamins and minerals, such as proteins, zinc (source) but also fructose and cholesterol. There is even a rumor that semen may contain as much vitamin C as an orange…

But the benefits of semen don't just stop at nutrients. According to a study conducted in 2002, sex without a condom and ending in ejaculation would have beneficial effects on depression in women (source).

Another study in 2014 was also able to determine that pregnant women in contact with sperm could allow them to avoid preeclampsia, or otherwise called toxemia of pregnancy. A serious pathology of gravidic hypertension which generally appears in the second half of pregnancy (source).

Finally, due to its high concentration of spermine (the main protein), sperm would have very promising anti-aging effects (source).

How to change the taste of semen?

Foods that make it more pungent

Spermine is a protein that can impact the smell, flavor, and color of your semen. Indeed, its oxidation gives a yellowish tint as well as an acrid flavor to sperm.