Why Do I Have Redness On My Penis (Pictures)? 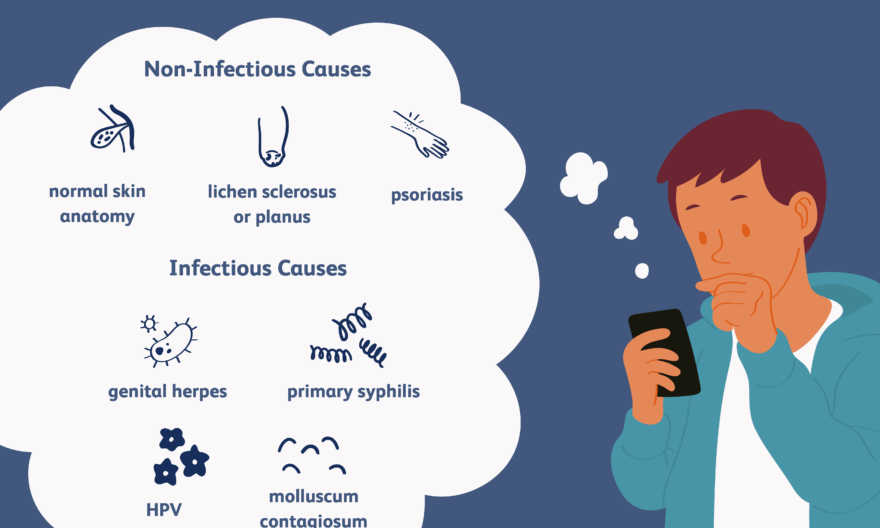 You may have had redness on your arms or legs, or even on your face. But a redness on the penis? It can happen, and many things can cause it.

Redness can appear as itchy red patches on the tip of your penis or on the shaft. It can appear as smooth, red and pink spots, small bumps or swollen welts. Rashes can be harmless or serious. They can go away quickly or sometimes last a long time.

Some photos of the redness of the penis

Balanitis: redness under the glans

Balanitis is an inflammation of the head of the penis, also called the glans penis, which can also involve the foreskin. This inflammation is more common in uncircumcised men, meaning your foreskin is still intact. If you haven't been circumcised, it can be difficult to keep the skin underneath clean. Bacteria, sweat, and dead skin cells can build up and cause the skin covering the head of the penis to swell. This can lead to itching, rashes, redness, and discharge under the foreskin. It can also hurt.

Doctors call it balanitis. You are more likely to get it if you have diabetes. This is because the sugar in your urine collects under your foreskin, where the bacteria start breeding.

This itchy red rash occurs when an outside substance irritates your skin. Common culprits are chemicals in soap, cologne, detergent, or even spermicide.

An outbreak usually develops within minutes to hours after contact. It is not contagious, but can persist for up to a month. If you develop a rash, think about any new products you may have used recently. Stop using them to see if your symptoms improve.

Certain medications can trigger a rash. You could be allergic or it could be a side effect of the medicine. Anti-inflammatory drugs, antibiotics, and pain relievers like Tylenol can cause what doctors call "drug rashes." These affect the genitals and can cause redness on the penis. They can also cause blisters and dark areas that appear after the inflammation subsides.

The type of reaction you have, how quickly it starts and how severe it is depends on the medicine.

This rash looks like dark, shiny red spots on the tip of your penis. Because it's an area you often keep covered, the rash stays moist. It does not develop thick scales like psoriasis does on other parts of your body.

You can get it whether your penis has been circumcised or not.

If you have sex with someone who has an infection or disease of the genitals, you can also catch it. Common STDs that could cause you to develop a rash on your penis include:

Scabies : These tiny mites burrow under your skin and lay eggs, causing an acne-like rash and intense itching. You get scabies from having skin-to-skin contact for a long time with someone who has it. That's why sex is a common way to get it.

Itching can get worse at night. Scratching the area can lead to sores, which can become infected.

Syphilis. The rash of condyloma lata is related to the secondary stage of this STD. It causes large, raised gray or white lesions on the genitals. You can get it if your penis comes in direct contact with a syphilis sore (called a chancre) during sex. Chancres are a manifestation of primary syphilis and are usually not itchy or painful, so you may not know you have one. Yet syphilis can lead to serious health problems.

Genital herpes can cause itching, pain, and sores in the genital area. If you have this condition, you may not have any obvious signs or symptoms. You can be contagious even if you have no visible sores. Genital herpes is incurable. But medications can help reduce symptoms and the risk of spreading the infection to others.

A painful rash and redness on the penis or the head of your penis can signal a yeast infection. Yeast is a common fungus, but when it grows too much it can cause problems. A number of things can cause it to multiply, such as humid conditions or if your immune system is weakened. Some antibiotics can kill bacteria that normally control yeast growth, resulting in yeast infection.

When and who to consult in case of redness on the penis?

As soon as the above symptoms appear, consult a general practitioner, dermatologist or urologist to treat the infection as soon as possible to prevent the spread of the fungus. The doctor will confirm that it is indeed a yeast infection and rule out other conditions, such as genital herpes, eczema, psoriasis or inflammation of the glans caused by bacteria, which require treatment. different from yeast infections.